The money was raised through dress down days, a tuck shop and cake baking and was presented by chief executive, Chris Eaton, to the charity's founder, Dee Struthers. 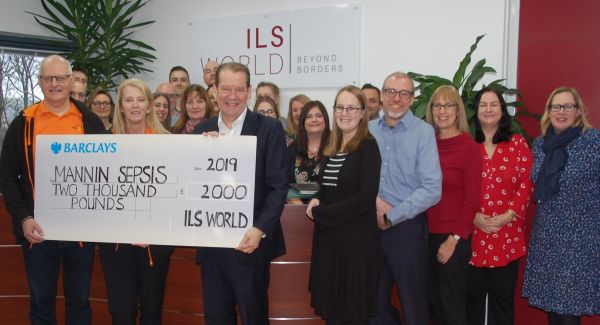 Staff at ILS World, which is based on the Summerhill Business Park in Douglas, voted to back the group which was set up in memory of Island teenager Ann Struthers who died from sepsis in 2013 at the age of 18. Ann's parents, Dee and John Struthers, joined forces with sepsis survivor, Alison Thomas in 2016 to ensure more people recognise and act on the warning signs.

To help spread the message the group has funded leaflets included in every child's health record, known as the "Red Book", and given to all new parents on the Isle of Man. It teamed up with the Island's ambulance services to arrange awareness training and four ambulances have messages on the vehicle saying, "Just ask, could it be sepsis?". It also paid for and maintains a specialist monitor in the Island's pathology laboratory which can quickly diagnosis sepsis which increases the chances of recovery.

Dee Struthers said: "We continue to raise awareness of the signs of sepsis which are slurred speech, shivering and muscle pain, failing to pee, breathlessness, an awareness of being critically ill and discoloured skin. The message "Just ask, could it be sepsis? has been added to two of the Island's buses, to all MannVend coffee machines and to public screens in the airport and sea terminal. For World Sepsis Day on September 13 we worked along with Isle of Man Post Offices who delivered 38,000 Mannin Sepsis leaflets to households and to 2,500 businesses. We also delivered to all the health care facilities around the Island mouse mats and pens with "Just Ask, Could it be Sepsis?" on them.

"Our project for this year is to increase our portfolio of public advertising signs and to further develop the options to access literature and support for those who have survived sepsis. We are also in the process of organising a fund raising Ball to be held on April 25 at the Empress Hotel."

ILS World provides independent fiduciary services to professional advisors, international corporate groups and private clients from offices in the Isle of Man, British Virgin Islands, Hong Kong, London and Portugal. Chris Eaton said: "Mannin Sepsis should be applauded for achieving so much in such a short time. The key is to identify and treat the condition quickly and we hope our support will help spread the awareness of the condition and get it on everyone's radar."